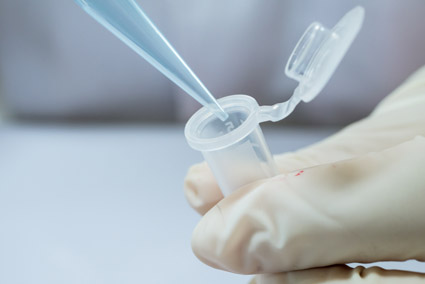 CRISPR genome editing uses a CRISPR-associated (Cas) enzyme. Several Cas enzymes have been identified in various bacterial systems. Some of these have been adapted for use in eukaryotic systems. The 2 most popular enzymes used in CRISPR genome editing are Cas9 and Cas12a (Cpf1), because they are highly functional, do not require binding to other enzymes, and can be readily programmed to target the desired genomic DNA site. This programming occurs through a short guide RNA (gRNA) molecule that is designed by the researcher. The Cas9 or Cas12a enzyme binds the gRNA, forming a ribonucleoprotein (RNP), then, the gRNA directs the RNP to the targeted site in the genomic DNA, where the Cas enzyme cuts the genome.

The IDT Alt-R CRISPR-Cas systems work as follows: You get chemically synthesized gRNA and recombinant, fully formed Cas enzyme (either Cas9 or Cas12a). You also can get positive and negative gRNA controls, an electroporation enhancer, a DNA donor for homology-directed recombination (HDR), and an HDR enhancer. Once you have these reagents, you simply combine the gRNA and the Cas enzyme on the bench, forming the RNP, and then use electroporation to deliver this RNP to your cells. This is how genome editing is accomplished quickly and accurately. Ultimately you can determine your results using next-generation sequencing (NGS).

What is the difference between CRISPR-Cas9 and CRISPR-Cas12a?

* For help in choosing whether sgRNA, or the combination of crRNA and tracrRNA is best for your application, see this DECODED article.

Alt-R products for gene editing with either Cas9 or Cas12a are available. These products include recombinant Cas enzymes, gRNA that can be designed for your target region using our web-based tools, and all the necessary reagents, kits, and controls. All of the Alt-R CRISPR products have been developed by our in-house scientists using the latest knowledge in genome editing.

The Alt-R recombinant Cas enzymes can be directly used in a wide variety of cells, eliminating the need for plasmid expression. This significant time savings is additionally augmented by our engineered Cas mutations, which increase efficiency and specificity, and also our Alt-R gRNA designs with chemical modifications, which give outstanding CRISPR cutting efficiency and specificity. Our Alt-R CRISPR systems are useful in a wide variety of cells and organisms, including mammalian cells, C. elegans, zebrafish, plants, and other systems. For plants in particular, the Cas12a system includes Cas12a Ultra, which is exceptionally efficacious at lower temperatures.