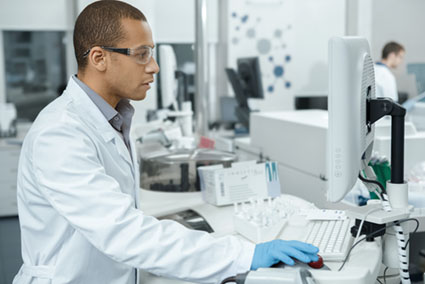 CRISPR genome editing provides a fast, efficient method of altering the genome of living cells and organisms. The term CRISPR derives from "clustered regularly interspaced short palindromic repeats," which are naturally occurring DNA sequences in prokaryotes. Together with CRISPR-associated (Cas) nucleases these sequences form the basis of a bacterial defense mechanism. The Cas nucleases create a double-strand break (DSB) at specific sites within the genome. Cas12a is an endonuclease found in many bacterial species. For genome editing, the most commonly used Cas12a enzyme is that from Acidaminococcus sp. In genome editing, Cas12a creates a DSB with a staggered 5′ overhang that is in contrast to the more widely used Cas9, which creates a DSB with blunt ends.

Cas12a is guided to the target site by a short RNA sequence called a CRISPR RNA (crRNA) that is complementary to the target DNA. Cas12a requires only a crRNA to specify the DNA target sequence. Unlike Cas9, no tracrRNA is needed. The target sequence comprises approximately 21 nucleotides and is adjacent to a protospacer-adjacent motif (PAM) sequence. The Cas12a enzyme recognizes a unique PAM sequence of TTTV (where V is A, C, or G). Cas12a cuts the strand which contains the PAM at a location 18–19 bases from the 3′ end of the PAM. The cut on the opposite strand of the DNA is 23 bases from the PAM, resulting in a 5′ overhang of 4–5 bases.

The Cas12a system was first published in 2015 [1]. The TTTV PAM sequence greatly expands the number of possible editing sites beyond those targeted by Cas9, which requires an NGG PAM site. As a result, Cas12a systems can be used for genome editing in organisms with AT-rich genomes, including model organisms such as plants and C. elegans.

IDT has developed a variant of Cas12a which works exceptionally well at low temperatures. This enzyme, Alt-R A.s. Cas12a Ultra nuclease, has remarkably high specificity and activity, and it dramatically increases Cas12a editing efficiency. Therefore, Alt-R A.s. Cas12a Ultra nuclease is a universal solution for animal and plant systems whenever a TTTV PAM site is present on either strand of your target genomic DNA. In addition to recognizing standard TTTV PAM sites (i.e., TTTA, TTTG, and TTTC), Cas12a Ultra sometimes is also able to recognize PAM sites with TTTT sequences. At many sites, Cas12a Ultra can recognize “TTTN” PAM sites, where N represents T, A, G, or C (Fig. 1).

Figure 1. Cas12a mechanism. Schematic shows Cas12a (Cpf1) with a bound crRNA targeting a genomic site. Cas12a creates a double-strand cut with staggered ends. The TTTV PAM site is on the strand opposite to the targeted strand. Alt-R Cas12a Ultra has the same mechanism as wild-type Cas12a while displaying much greater potency and higher tolerance for a wider range of temperatures than wild-type.