Research profile: Read about the uses of RNase H–dependent PCR, a technology developed by IDT to increase PCR specificity and eliminate unwanted interactions, such as primer-dimers, between primer sets. In this example, RNase H–dependent PCR is used to distinguishing highly similar alternatively spliced sequences. This technology can also be useful in genotyping applications, in highly multiplexed qPCR assays, library construction for next generation sequencing, and for rare allele detection, where the added specificity provided by the blocked-cleavable primers enables detection of a rare mutant allele in a background of large amounts of wild type DNA.

While it is possible to achieve high specificity with PCR amplification, project objectives sometimes require primer positioning at suboptimal locations within the target. This can result in the formation of primer-dimers and/or undesired amplification of homologous sequences. To increase PCR specificity and eliminate primer-dimers, scientists at IDT developed RNase H2–dependent PCR [1]. The technology relies on cleavage of a 3′-blocked primer by Pyrococcus abyssi (P.a.) RNase H2 to activate the primer before target amplification. RNase H2 cleavage occurs at the 5′ end of a single RNA base included in the blocked primer, and only after primer hybridization to target DNA (Figure 1). Because primers must hybridize to the target sequence to form RNA:DNA hybrids before cleavage and primer activation can occur, the primers are unable to form primer-dimers. Additionally, the requirement for high target complementarity reduces amplification of closely related sequences. After cleavage, the unblocked primer is available to support extension and replication during PCR. RNase H–dependent PCR, historically referred to as rhPCR, forms the basis of rhAmp technology, which facilitates SNP genotyping applications, highly multiplexed amplification, and the detection of rare alleles. 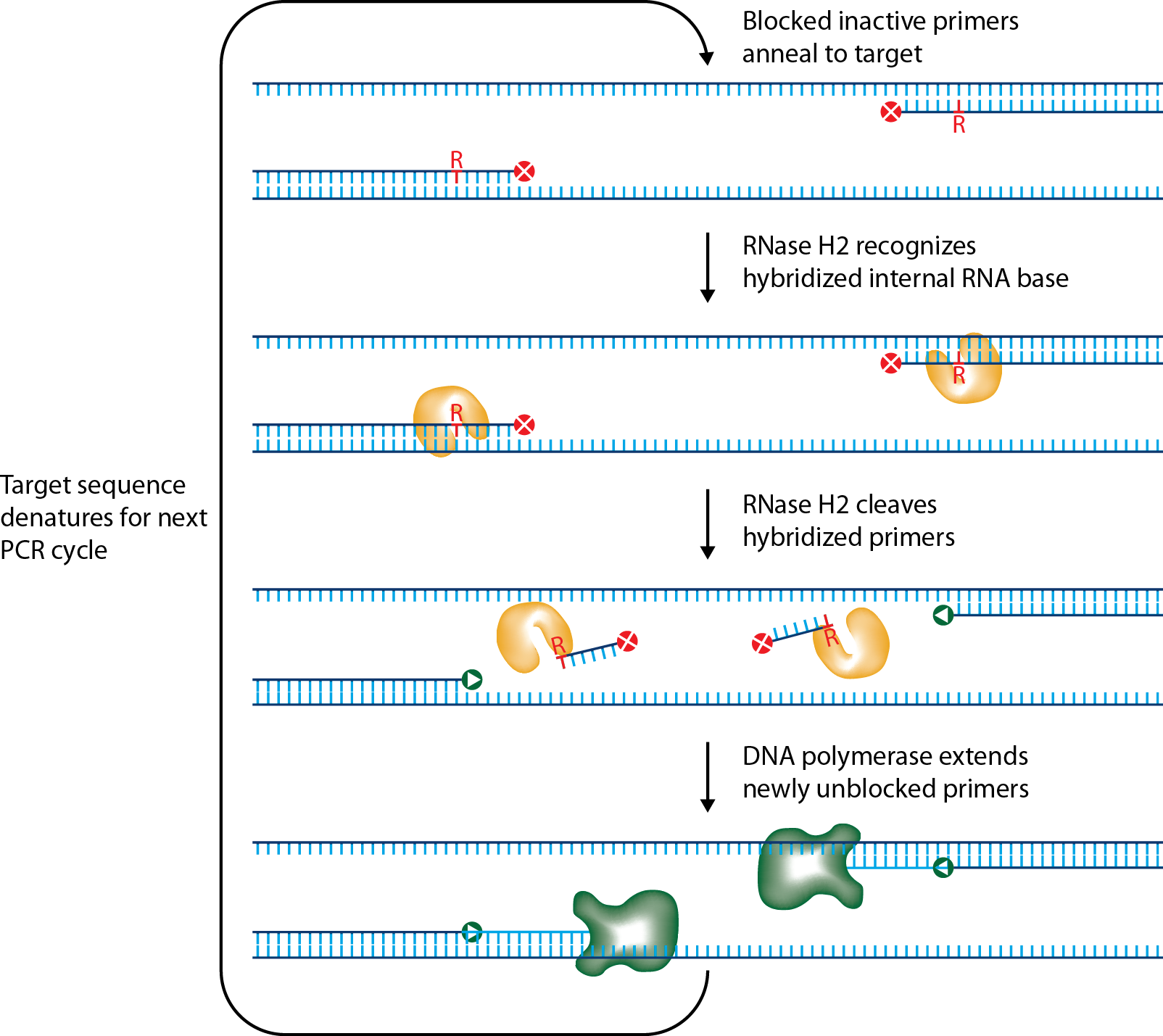 The recent paper, Latrophilins function as heterophilic cell-adhesion molecules by binding to teneurins: Regulation by alternative splicing, from Boucard AA, Maxeiner S, and Südhof TC [2], provides an example of using RNase H–dependent PCR for measuring the expression of transcripts that undergo complex splicing. It also extends the method to RT-PCR. In mouse, the latrophilin genes (Lphn1, Lphn2, Lphn3; see Definitions sidebar) each include a small, alternatively spliced mini exon of only 12–15 bp (Figure 2). This exon is highly conserved across species in invertebrates and vertebrates, suggesting that it encodes a region of functional significance.

The similarity between latrophilin genes makes it difficult to use standard qRT-PCR assay design tools to generate assays that would distinguish the various transcripts. To complicate matters further, the scientists discovered that for Lphn2, the mini exon had 2 potential alternative splice acceptor sites, leading to shortened (12 bases, 4 amino acids) and full (15 bases, 5 amino acids) mini exon variants (Figures 2 and 3). This proved to be a situation where the RNase H–dependent PCR could provide an advantage.

Figure 3 shows these primer sequence locations relative to the latrophilin exon boundaries. The scientists then modified the original RNase H–dependent PCR technique [1] for RT-PCR, by adding an optimized concentration of RNase H2 after the initial cDNA synthesis step [2]. They were able to design these specific assays within a limited design region to distinguish between alternatively spliced variant transcripts, allowing them to compare Lphn gene expression levels in various tissues.

Figure 3. Design of primer and probe sequences for RNase H–dependent PCR. Shown are the respective parts of the transcript sequences for latrophilins (Lphn1, Lphn2, and Lphn3) with the forward primers (labeled a, b, c) used in the RNase H–dependent PCR assays depicted above and below. Distinct blocked, cleavable forward primers were designed to specifically amplify transcripts with or without the alternatively spliced mini exon. Sequence displayed in capital letters represents DNA bases, while lowercase letters are the RNA bases where RNase H cleavage occurs. The “x” at the 3′ end of each transcript represents the C-3 spacer used as the primer blocker. Dual-Quenched Probes, which are the standard probe type in PrimeTime qPCR Assays are shown in green; green open circles = dyes, red circles = quenchers. Red bases = sequence common to transcripts of all 3 forms of latrophilin; blue bases = sequence common to 2 forms of latrophilin; black bases = sequence unique to that specific latrophilin transcript.

A role for the alternatively spliced mini exon?

The resulting quantitative RT-PCR assays selectively measured Lphn1 and Lphn3 mRNAs containing or lacking the mini exon insert, and Lphn2 mRNAs containing either the shorter or longer version of the mini exon insert or lacking the insert all together (Figure 3). Expression results of latrophilin variants revealed that alternative splicing of the mini exon differs among latrophilins and that, in particular, most Lphn2 mRNAs in brain contain the insert, whereas most Lphn2 mRNAs in non-neural tissues lack it. Saturation binding experiments performed on Lphn1 splice variants revealed that the sequence encoded by the mini exon had a differential effect on Lphn1 binding affinity to its endogenous ligands. Indeed, insertion of the mini exon affected Lphn1 binding affinity to teneurins, but not to Flrt3 or neurexin1 (see the Definitions sidebar) [2]. This activity suggests that the effect of alternative splicing on ligand binding is specific and that this region appears to further modulate protein-protein interaction.

rhAmp PCR technology is ideal for distinguishing highly similar sequences, including in genotyping (see rhAmp SNP Genotyping System). In addition, rhAmp PCR technology can increase the success of methods currently hindered by unwanted interactions between multiple primer sets (e.g., primer-dimers), such as in highly multiplexed qPCR assays and in library construction for next generation sequencing, where resulting libraries are often contaminated with primer-dimer “blank reads”. The technique is also useful for rare allele detection, where the added specificity provided by the blocked-cleavable primers enables detection of a rare mutant allele in a background of large amounts of wild-type DNA.

RNase H2 can be incorporated into current end-point PCR and qPCR protocols with little to no modification in reaction temperatures, cycling times, or analysis procedures. Primer design instructions, a protocol for RNase H–dependent PCR, and published examples of applications using this technology can be found on the rhPCR primers and RNase H enzyme web pages.

Synaptic cell adhesion molecules that are type I transmembrane proteins, comprising 3 genes in vertebrates. Each of these genes is controlled by 2 promoters, resulting in a- and b-neurexins. A hallmark of neurexin genes is their extensive alternative splicing, which can generate more than 3000 isoforms; and can modulate protein-protein interactions [12–14] and, by consequence, neuronal functions [8].

A fibronectin leucine-rich transmembrane protein involved in complex protein-protein interaction networks. Genetic ablation of Flrt3 causes defects in tissue morphogenesis and development as well as synaptic defects [7,15]. Although Flrt3 is linked to neuronal functions, its precise role is unclear, as it appears to act both as a repulsive guidance cue as well as being synapse inducing [16].

A family of 4 large type II transmembrane proteins (in vertebrates) that owe their name to a similarity with the tenascin proteins. Mouse gene deletion and overexpression studies suggest these proteins play a role in axonal guidance, oligodendrocyte differentiation, myelination, and synapse target selection [5,6,9–11].

G protein–coupled transmembrane receptors that exist as 3 isoforms in mammals and are encoded by genes Lphn1, Lphn2, and Lphn3. Each gene expresses alternatively spliced variants in the N-terminal lectin binding domain [2] (Figure 2). While deletion of Lphn1 alone shows no major phenotype [3], latrophilins do appear to form functional protein complexes that affect synapse development and maintenance through binding to teneurins and Flrt3 [4–7], but also to neurexins, the calcium-dependent receptor for α-latrotoxin [12].

Available at two concentrations, for use with rhPCR primers in rhPCR applications

For use with RNase H enzyme in rhPCR applications