Storing oligos: 7 things you should know

Lab tips: Researchers often have questions about the stability of their oligos and how best to store them. Review these important considerations and supporting data, which were generated from a multi-year, longitudinal stability study.

Of these two variables, temperature is most important. When stored at –20°C (frozen), IDT oligos remain stable for two years (24 months), regardless of whether they are stored dry or resuspended in TE buffer or nuclease-free water (Figure 1A).

Similarly, at 4°C (refrigerated), there is no significant difference in stability between storage mediums. At this temperature, oligos stored across the same three mediums—dry, TE buffer, and nuclease-free water—are stable beyond one year (>60 weeks; Figure 1B).

The best practice is to store oligos in a freezer (–20°C) in either TE buffer, nuclease-free water, or dried for up to 24 months. It is also best practice to minimize oligo exposure to UV light. 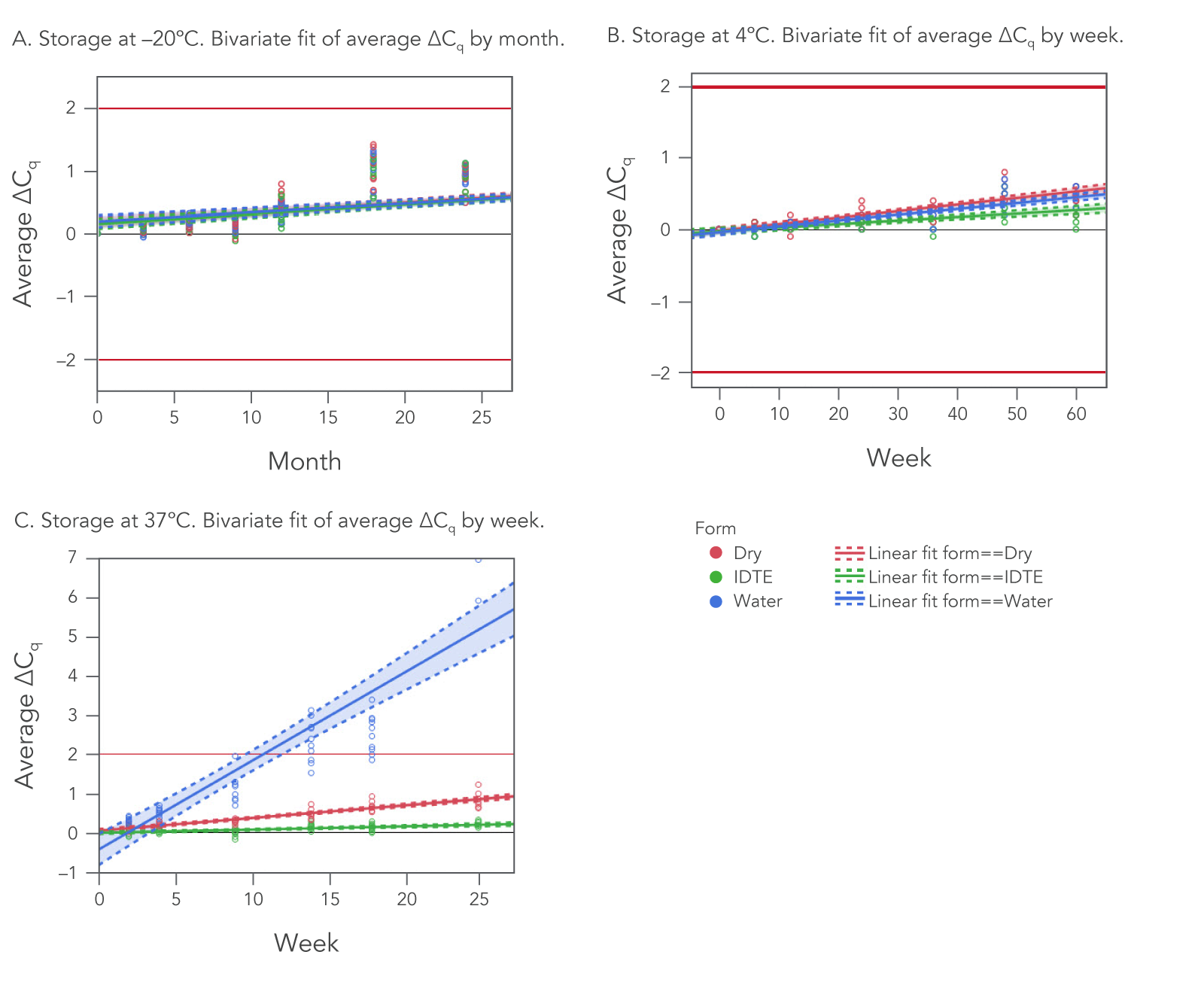 To test the stability, oligos were stored at  37°C/98°F for up to 25 weeks and then tested for functionality in qPCR assays. There were clear differences in stability between storage mediums (Figure 1C). At 37°C, oligos stored in nuclease-free water were the least stable, followed by dried oligos. Those stored in TE buffer (IDTE, pH 8.0) exhibited the best stability.

There is always some moisture present in a dry oligo, albeit a very small amount. This moisture can cause DNA damage over time, which is why freezing your oligos, whether they are stored in TE buffer, nuclease-free water, or dried, is the best option for long-term storage. If you do choose to store your oligos at room temperature, resuspending them in TE buffer will provide a more stable environment than storing them dry.

3. Resuspending and storing your oligos in TE buffer is the best way to ensure oligo stability.

IDT studied the stability of DNA oligos in three different storage mediums: dried, nuclease-free water, and TE buffer (pH 7.5/8.0). In these studies, oligos stored in a buffered solution are the most stable for the longest periods, especially in higher storage temperatures. Tris [tris(hydroxymethyl)aminomethane] maintains a constant pH, while EDTA (ethylenediaminetetraacetic acid) acts as a chelating agent, preventing nuclease digestion of DNA.

In summary, we recommend you resuspend and store your DNA oligos in TE buffer rather than nuclease-free water. For your convenience, IDT supplies our own IDTE in a variety of volumes, and you can select solutions at pH 7.5 or 8.0. For ordering information see Buffers and solutions.

4. Oligos are stable in shipping conditions.

Oligo stability was assessed in a “worst-case scenario” shipping condition. We stored lyophilized (dried) oligos at 37°C/98°F for up to 25 weeks and then tested for functionality in qPCR assays at various time points. As seen in Figure 1, Part C (red line), dry oligos had minimal loss of activity (ΔCq<1.5) for up to 25 weeks when stored at 37°C.


We ship most of our oligos dry, and the short shipping time will not jeopardize oligo stability for any standard oligo. As mentioned earlier, dry oligos remain stable for up to 25 weeks when stored at 37°C (98°F). Even stored in water, the least stable of the storage media, oligos remained functional for multiple weeks at this higher temperature. We ship oligos dry as a default to provide you with the flexibility to decide which storage media is best for your end use of the oligo.

5. Freezing and thawing your oligos will have minimal impact on oligo stability.

It is not uncommon for some researchers to repeatedly freeze, then thaw their oligos while working in the lab. To address this, we functionally tested oligo stability after multiple freeze-thaw cycles, using either nuclease-free water or IDTE buffer as resuspension liquids (Figure 2). In our experiments, we found that 30 cycles had no significant impact on oligo stability or function. This was true for both resuspension liquids tested (nuclease-free water and IDTE).

Although oligos remain stable through repeated freeze-thaw cycles, repeated exposure to the environment could inadvertently introduce nucleases. To prevent contamination of stock solutions, we recommend aliquoting oligos before storage.

Oligo stability is maintained after thirty freeze-thaw cycles. A standard scale IDT PrimeTime™ qPCR Assay containing oligonucleotide primers and probes was hydrated in IDTE Buffer to 40X. The tube was frozen (–20°C) and thawed thirty times. At (A) 0 and (B) thirty freeze-thaw cycles, an aliquot of the assay was run against a validated universal human reference cDNA standard curve (0.005–50 ng) using TaqMan® Gene Expression Master Mix (Thermo Fisher). The oligo components of the assay were stable and functional for up to thirty freeze-thaw cycles, showing no impact on Cq value. (C) The PrimeTime qPCR Assay at 0.5 ng cDNA concentration is shown in a reference dye-normalized view (Rn).

For modified DNA oligos and for RNA oligos:

6. Oligos with modifications have similar stability characteristics as unmodified oligos, and therefore should be stored using the same guidelines.

While we have not extensively tested long term stability of our full catalog of modifications using different storage conditions, we do expect most modified oligos to possess similar storage characteristics as unmodified oligos. Freezing is optimal when storing modified oligos for long durations, and IDTE buffer will help preserve stability at temperatures above freezing. Short term exposure to UV light, ambient lab light, or ozone should not affect the function of fluorophore-modified oligos. However, when storing these oligos long term, we do recommend keeping them in the dark, regardless of storage medium, temperature, and duration; to prevent any negative impact on the fluorophore’s stability.

The chemical structure of RNA makes it inherently less stable than DNA. Further complicating RNA storage is the fact that RNases, which are present in human saliva, mucus, perspiration, and dead skin/hair cells, are often much more prevalent in standard laboratory conditions than DNases [1]. Avoiding RNase contamination is crucial to maintaining RNA oligo stability, as even the slightest exposure to RNase can cause substantial degradation. For short-term RNA storage, we suggest using our IDTE Buffer. If storing RNA oligos for long periods (months or years), RNA should be stored as an ethanol precipitate at –80°C [2].

The preceding facts and data were generated during a multi-year longitudinal study of oligo stability. Our scientific application specialists are readily available to answer any further questions or to provide guidance on oligo handling and experimental setup. Contact them at applicationsupport@idtdna.com.

Your DNA or RNA sequence, desalted, deprotected, up to 1 µmol in tubes or plates. Verified by mass spectrometry.

No end to the modifications available. Shipped dried, hydrated, or annealed.

Indispensable for linking an oligo to another molecule, providing resistance to nuclease degradation, and more.