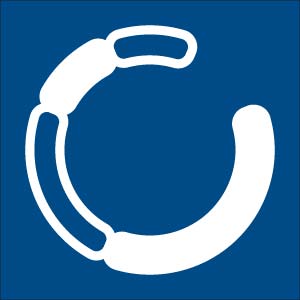 DNA origami combines a long (~8000 nt) single strand of DNA (a scaffold) with hundreds of short oligos to form a specific conformation. The resulting DNA structures can be used in applications ranging from nanorobots to controlled drug delivery.

Scientists usually think of DNA in terms of its linear sequence, which carries the genetic information of living organisms. However, new techniques are being developed also to take advantage of the 3D structure of DNA to engineer specific nanoscale objects for use in many kinds of scientific studies, both biological and not specifically biological. One of the most exciting of these new techniques is DNA origami. DNA origami involves use of a very long (~8000 bases) single strand of DNA, the scaffold strand, as the main structural component. This strand is held in a desired configuration through simple base-paring with hundreds of short “staple strand” oligonucleotides (30–80 nt each). Blocks, flat squares and rectangles, rods, flexible hinges, gears, large planar arrangements of repeated patterns such as hexagon shapes, and many other nanostructures can be generated with DNA origami (Figure 1). DNA origami has been used for construction of nanorobots and other structures for studies of fluorescence, enzyme-substrate interactions, molecular motor actions, various light and other energy studies, and for drug delivery. In a large number of these studies, pieces of DNA origami have served as molecular breadboards (stable surface structures or construction bases) rather than forming the robot or moving pieces. In other studies, DNA origami has played more active roles, forming dynamic devices with movable pieces. Several of these uses are described briefly below.

The field of molecular robotics has been one of the largest applications for DNA origami. Researchers have produced complicated nanorobots composed of DNA origami structures combined with other nano-engineered products (including quantum dots, carbon nanotubes, and other nanoparticles). These nanorobots are able to move and even carry gold, silver, or other nanoparticles on defined paths [1]. Such structures allow study of the interactions between various molecules. For example, DNA origami structures have been used to bring different sections of a type of green fluorescent protein together, resulting in fluorescence [2]. This was helpful for increasing understanding of how this protein works. Researchers have also used DNA origami to investigate the dependence of fluorescence on intermolecular distance by controlling the quenching of fluorophores by nanoparticles [3].

Origami structures can be designed to deliver an enzyme to its substrate or block this interaction. In one study, scientists shaped a DNA origami structure with a window that could be opened or closed at will to separate an enzyme (DNAzyme) and its substrate (a target DNA strand) [4]. In another project, researchers used DNA origami as a stable surface with a swinging arm [5] which transferred substrates between enzymes such as glucose 6-phosphate dehydrogenase and malic acid dehydrogenase [5].

DNA origami and light can be combined as tools to bring about desired effects. For example, researchers have designed oligos containing photocleavable spacers to connect different parts of a DNA origami structure [8]. When the structure was irradiated, its conformation changed [8]. In the field of cryo-electron microscopy, DNA origami has been used to hold macromolecules, including large proteins such as p53, to facilitate their 3D structural analysis [9].

To study voltages applied across lipid membranes, synthetic DNA origami nanopores have been designed [1]. In one study, these nanopores were rendered hydrophobic by linking them to functional cholesterol residues, allowing the nanopores to span lipid bilayers [10]. The pores were able to conduct electricity and were used in studies of other DNA structures. In particular, the researchers demonstrated that by applying a positive voltage, they could unzip a DNA hairpin on one side of a membrane, making it single-stranded, after which it would translocate through the DNA origami nanopore, transiently blocking the current through the nanopore [10]. These observations and others demonstrated that DNA origami nanopores could be used at the single-molecule level to distinguish different types of molecules, as these molecules translocated differently through the pores [10].

DNA origami structures, particularly those with triangular shapes, have been shown to target cancer cells specifically [11]. Scientists recently developed a hybrid of a triangular DNA origami structure with a gold nanorod [12]. This hybrid product successfully functioned as both an optoacoustic imaging agent and a photothermal therapy agent. This agent was injected into tumor-bearing mice. Multispectral high-resolution optoacoustic imaging and other imaging techniques showed selective take-up of the hybrid agent into tumors. Finally, the injected mice were treated with near-infrared radiation. Previous experiments had shown that this kind of radiation causes gold nanorods to emit heat, killing cells. The mice’s tumors regressed almost completely and the mice showed significant survival benefits compared to controls [12].

As leaders in their respective fields, IDT and tilibit nanosystems (Garching, Germany) have partnered to provide DNA origami reagents. The single-stranded Scaffold DNAs come in 3 lengths—7249, 7560, and 8064 bases. These are available in convenient Folding Kits, which also contain stock solutions of MgCl2 and Folding Reaction Buffer, as well as an EDTA-free Loading Dye, developed to support straight bands in agarose gel electrophoresis. The kits as well as Staple Strand Oligos are available through the DNA origami reagents page on the IDT website. The Staple Strands are available separately as custom designed oligonucleotides. Additional information regarding folding reaction buffers, MgCl2 solutions, and loading dyes can be obtained by contacting tilibit at sales@tilibit.com.

Custom Staple Strands can be provided for any required structure. Because DNA origami design is complex and benefits from specialized expertise, we recommend that new users contact tilibit nanosystems for design assistance before ordering DNA origami reagents. The tilibit DNA origami experts will help you choose the best DNA origami shape for your individual research project(s), whether one of their predesigned structures or a custom design.

Web-based software tools are available for investigators interested in performing their own DNA origami design and analysis. DNA origami experts at tilibit nanosystems recommend cadnano for design and CanDo for analysis.

Use to deliver drug molecules or develop novel biosensors and nanodevices.